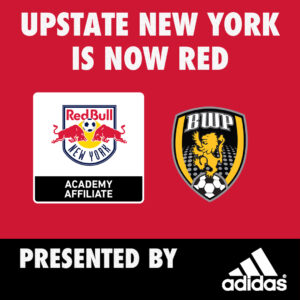 The most talented players within the Academy Affiliate Program participate in co-partnered elite player development and talent identification programs operated by both the Affiliate club and the New York Red Bulls Academy.

“We are pleased to be able to announce Black Watch Premier (BWP) as one of the founding members of our New York Red Bulls Academy Affiliate Program. We look forward to working with Steve Freeman, his staff and the organization as a whole to not only provide a professional pathway for their current top prospects but to also work closely together on continued coach education and shared best practices,” said Sean McCafferty, the New York Red Bulls Academy Director.

“Black Watch Premier is extremely proud to be working with New York Red Bulls,” said Steve Freeman, the President, and CEO at Black Watch Premier. “They are one of the premier MLS teams that take pride in Educating, Developing, and Promoting home grown Academy talent. Together, we will elevate the skills and knowledge of our Long Island soccer players so they too have a chance to be showcased.”

“One of our U17 Academy high potential players Nicholas Rabiu is a product of BWP. We look forward to working with Steve Freeman and his staff to ensure they continue to identify, recruit, and develop more players of Nicholas Rabiu’s level. We want to increase the number of top talents coming into the club and more importantly the depth in talent at those key development age groups. This will be the foundation for long term success,” added McCafferty.